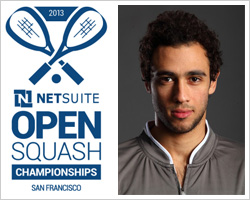 Two-time World Champion Ramy Ashour, who many consider to have the talent to become the best squash player of all time, will put his 41-match unbeaten streak on the line when he makes his first NetSuite Open Squash Championships appearance. The 5-11, 176-pound Egyptian is coming off of his first victory at the British Open squash's most historic tournament and has held the top ranking in the world for seven consecutive months.

"Ramy is the face of squash, so having him play in the NetSuite Open furthers our progress towards the goal of it becoming one of the top tournaments in the world," said Evan Goldberg, NetSuite's co-founder, Chief Technology Officer and Chairman of the Board.

Sanctioned by the Professional Squash Association, the PSA International 70 NetSuite Open is one of the top 15 professional tournaments in the world as determined by prize money. With a $70,000 purse, the winner will earn $11,300. France's Gregory Gaultier defeated England's Nick Matthewin three games to claim the 2012 crown.

Squash, with its roots dating back to the late 1800s in England, has been shortlisted along with wrestling and baseball for potential inclusion into the 2020 Summer Olympics. The decision will be made in early September.

"The NetSuite Open is just one of four elite pro squash championships to be played here in the U.S.," said John Nimick, a U.S. Squash Hall of Famer and President of Event Engine, Inc., the tournament producer."If squash is selected for the 2020 games, the NetSuite Open will be the first major tournament to be played in the U.S. following the announcement, turning the eyes of the sports world to San Francisco."

The early rounds, comprising two rounds of Qualifying and the First Round (final 16) of the Main Draw, will be played across courts at Stanford University, the Bay Club San Francisco, the Olympic Club and University Club. The Quarter Finals, Semi-Finals and Championship will be played at Justin Herman Plaza.

Some 450 reserved seats are available for the NetSuite Open, ranging in price from $30 to $250. For tickets, draws, schedule and more information, please visit www.netsuiteopensquash.com. Follow the NetSuite Open on Facebook and Twitter for real-time updates.

About Event Engine
Event Engine, Inc. is a visionary event and entertainment marketing company specializing in the creation of unique athletic, musical, corporate and philanthropic events in extraordinary venues.  Founded in 2000 by US Squash Hall of Fame member John Nimick, Event Engine has grown from the management of a single, but unique, annual professional squash championship in Grand Central Terminal to a portfolio of successful events in some of the best known locations in North America and with some of the best-known entertainment celebrities in the world.  The Event Engine mission is to provide an unparalleled, highly valuable, highest quality result for clients, customer and corporate partners.